The online mental health brand BetterHelp topped the ranker of the biggest podcast advertisers in June, with the retail therapy go-to Amazon holding on to second place. Magellan AI says BetterHelp spent an estimated $6.4 million during June, a 17% decline from a month earlier – but more than twice what any other marketer spent in the medium. BetterHelp placed ads on 654 different podcasts, with Comedy shows making up the largest portion.

Ahead of its annual Prime Day sales event, Amazon continued to spend heavily. Magellan AI says Amazon spent $2.9 million, a 37% drop off from a month earlier. Comedy was Amazon’s most-used genre, as it placed ads on 205 different podcasts.

The e-commerce platform Shopify was the big mover in the top ten as it rose to No. 3 with a 37% increase in its ad spending from May to June. Magellan AI says Shopify bought $2.6 million worth of ads, with Sports its most favored show category.

Google jumped from No. 11 in May to No. 4 in June with a 20% increase it its spending. Magellan estimates Google spent $2.3 million with Sports also its most-used.

ZipRecruiter rounded out the top five, holding steady on the ranker despite a 19% drop it its spending tally month-to-month. Magellan AI estimates the job site spent just under $2 million as its ads turned up on 121 different shows.

Magellan’s list of movers and shakers – the brands that increased their podcast spending during the month – was led by Omaha Steaks. It capitalized on summer barbeque season by boosting its spending to $514,000 in June compared to $100,000 in May. Historically, June has been Omaha Steaks’ highest spend month for the past three years. “Over the last couple of years Omaha steaks has established itself as a consistent seasonal advertiser, promoting heavily in June for Father’s Day,” says Magellan AI in a blog post. The direct response ads are primarily placed in a mid-roll position on podcasts in the Sports and News genres. Omaha Steaks also ramps up its spend in December for the holiday season.

The travel lodging website Airbnb also ramped up its spending as it looked to cash in on a crush of summer travel, earning itself a spot on the movers list. Magellan AI says it spent $266,000 in June versus $15,000 in May, a 1,732% increase.

Misfits Market’s 642% increase in spend landed them on Magellan AI’s movers and shakers lists for the first time in June. Magellan AI first detected the brand in June 2021 when it ran a four month campaign that ran during the summer months. This year Misfits Market appears to have kicked off a similar campaign. Magellan AI says Misfits Market targeted comedy series last month with brand awareness ad copy that highlighted their seasonal produce. The ads are primarily placed in a mid-roll position and averaged 90-seconds. 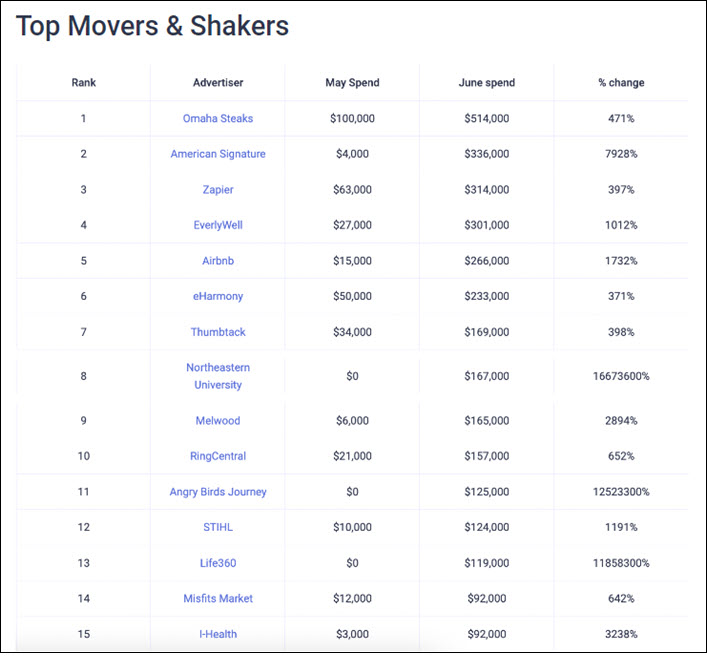 Magellan analyzes podcast advertising data from the top 3,000 podcasts in the U.S., as ranked by Apple Podcasts. Magellan AI’s proprietary model is used to estimate advertising spend. It includes factors such as the number of ads and variation in ad load detected for a given episode, number of downloads for each episode, and estimated CPMs as reported in select media kits and estimated based on popularity.

If you are interested in creating a podcast it is really simple to do. If you have never created a ...

Business Ideas : As many businesses strive to improve their position on the internet and pull in as much traffic ...