Social Media for the snowflake generation! Morale app only 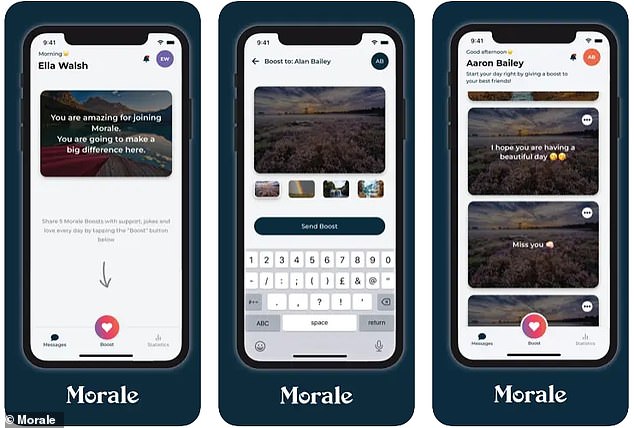 By Shivali Best For Mailonline

If you have a profile on any popular social media app, it’s likely you’ve either experienced or witnessed trolling on the platform.

Whether it’s a nasty comment or a humiliating image, figures suggest that a whopping 65 per cent of UK students have been victims of cyberbullying.

But a new app is on a mission to make this a thing of the past.

Morale is an invite-only app that encourages users to send their friends compliments throughout the day, and is described by its founder as ‘a support network in your pocket.’

Morale is an invite-only app that encourages users to send their friends compliments throughout the day, and is described by its founder as ‘a support network in your pocket’

This includes trolling, mobbing, stalking, grooming or any form of abuse online.

Cyberbullying is most certainly on the increase – more and more cases are being reported by children and by extremely worried parents.

Morale was founded by mental health advocate Aldwyn Boscawen, who took inspiration from the ‘morale’ chats he regularly had with his own friends.

‘My friends and I have always shared jokes and upbeat, promotional messages on our group chats first thing in the morning, and I found they gave me a boost and put a smile on my face,’ Mr Boscawen said.

‘Morale puts this at its centre, bringing those comments that make your day, to everyone – a support network in your pocket.’

The app is invite-only and encourages users to send anonymous compliments to their friends throughout the day.

Users can send and receive up to five anonymous messages every day.

‘It’s a simple way to show someone you care – to boost someone’s day and get it back in return,’ Mr Boscawen explained.

‘We want to make people happier by creating this cycle of positivity.’

Users can curate their own feeds, reducing the risk of having to deal with strangers or trolls, according to Morale. 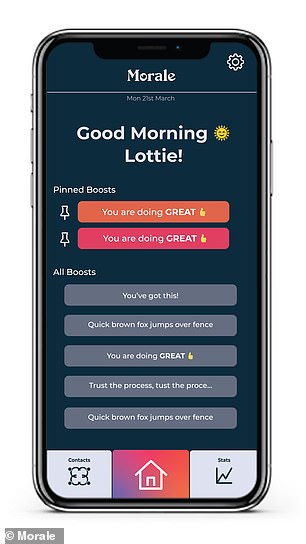 Users can curate their own feeds, reducing the risk of having to deal with strangers or trolls, according to Morale

Meanwhile, if users do see any unwanted or unsupportive messages, they can report and block them.

Morale is now available on iOS and Android, with users sent unique referral codes to share with friends and family.

Its launch comes shortly after research revealed that cyberbullying has a worse impact on its young teenage victims than ‘traditional’ bullying in person.

Researchers from the US and Israel analysed data collected on over 10,000 US children between the ages of 10 and 13 between July 2018 and January 2021 for the Adolescent Brain Cognitive Development study (ABCD Study).

They found that victims of online bullying in early adolescence are more likely to report suicidal thoughts and attempts than those who have experienced bullying offline.

‘At a time when young adolescents are spending more time online than ever before, this study underscores the negative impact that bullying in the virtual space can have on its targets,’ said senior author Dr Ran Barzilay, an assistant professor at the Lifespan Brain Institute (LiBI) of Children’s Hospital of Philadelphia.

Social Network – Facebook Marketing : It’s 2017 and Facebook is still the largest social network on the planet. With ...

The Rise Of Instagram And What It Can Do For Your Business Why? Since 2010, Instagram has proved itself to ...